There’s something intrinsically noble about indigo, sixth colour of the rainbow. Design experts tell us the shades of indigo suggest the qualities of “trust, truthfulness and stability”, perhaps the reason it came to be known as “Royal Blue” in Elizabethan England, where laws dictated that only Royalty and Nobility were entitled to wear the colour, and why else has the Virgin Mary been depicted wearing indigo since the Renaissance artists first painted her?
Dyeing with indigo is an all-natural process, and indigo has been used to dye fabrics since ancient times. The shades obtained from the indigo plant (Indigofera Tinctoria) are determined by soil acidity, prevailing climate and inconsistencies in the labour-intensive manufacturing process. Dyes vary, as do fine wines, and experienced growers develop a keen ability to bring precise changes to the recipe to achieve a specific hue.
In Sakon Nakhon, North East Thailand, Mae Tita revived traditional indigo dyeing when she was just sixty-five years old, reformulating techniques taught to her as a child. Now eighty-two, day-to-day management of the family’s business is in the hands of her grandson, although he still calls on her for advice fine-tuning a particular batch. Mae Tita has been known to suggest improvements to the fermenting indigo based on its taste alone, evidence that indigo-dyeing is entirely natural. The formula almost reads like a Thai recipe: soak freshly picked indigo leaves in rain water for twenty-four hours before mashing by hand with a woven bamboo “som” or fork to bring out the initial colour. Then add the ash of burned banana roots and coconut husks along with tamarind and mango and leave to ferment.
Made slowly, with love and patient attention, indigo textiles are highly sought-after and photographer Gavin Gough treasures his own indigo scarf, a gentle reminder of a place where tradition and natural processes are respected and valued. 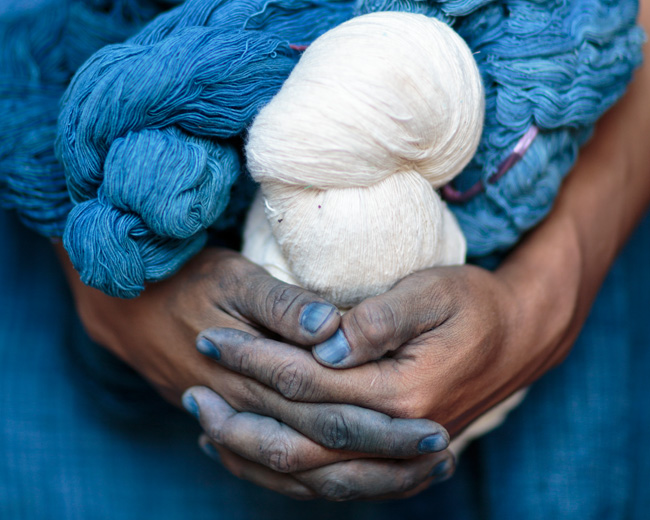 Buy this story?
Interested in running this feature in your publication?

Contact us to order images, search for you, for custom pricing or for anything else

...we'll be delighted to hear from you!